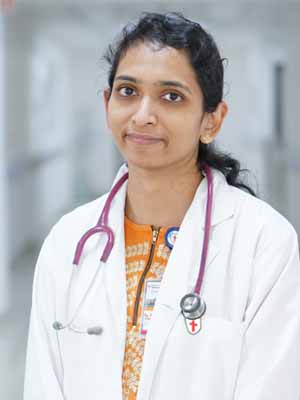 Dr Sujin Mariam Thomas completed her undergraduate studies from the prestigious Thanjavur Medical College, Tamil Nadu. Right from her UG days, she was keenly interested in Paediatrics. Subsequently, she finished her postgraduation from Pondicherry Institute of Medical Sciences, Pondicherry. During her residency, she received training in handling pediatric patients and was also actively involved in undergraduate teaching programmes.
She started off her career with a short stint as faculty at PIMS, Pondicherry. Later, she joined and worked as faculty in the Department of Neonatology, JIPMER. During her time there, she underwent training in handling and caring for newborn babies and management of neonatal emergencies. Armed with new knowledge, she became an integral part of the team there. A desire to return to her home state saw her join as a consultant Pediatrician in Lifeline Hospitals, Adoor and from there, she later joined the Department of Pediatrics, Believers Medical College.
She has been an integral part of the BCMCH team from 2019.
Her areas of interest include infectious diseases and critical care.