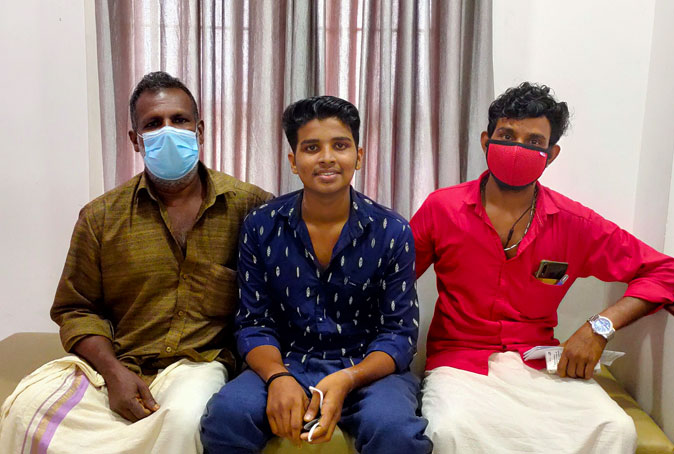 Around 10 days back, Akhil Das, a 19-year-old boy with great hopes about his future was rushed to the Emergency Department of Believers Church Medical College Hospital in a critical condition with septicemia, a high degree of desaturation and multiple organ failure. His parents are farmers, who earn their living mainly through cattle farming and by making coir at home. They own four cows and sell the milk to earn a living. His mother looks after coir making. His elder sister completed B.Com but is currently unemployed. Akhil helps his parents during his free time. They have had to take huge loans for their housing needs as well as for buying the cows. As a family, they have ensured that their children are given an opportunity to get good education.

They were managing somehow until two weeks back when Akhil suddenly fell ill. He developed symptoms of fever and vomiting. They went to a nearby hospital for treatment. Medicines gave him temporary relief. But the next day his condition worsened and was rushed to the hospital again. Upon evaluation, his saturation (oxygen level) was very low with evidence of damage to multiple organs. Therefore, the hospital authorities referred him to the Believers Church Medical College Hospital (BCMCH) for better care ... the hope was that BCMCH’s multidisciplinary team would be able to handle this difficult problem.

We received him in our Emergency Department. Seeing his condition our caring team got into action to save his life. The history of use of cow dung for manure and the clinical presentation pointed fingers towards the diagnosis of Leptospirosis-Weil's disease The diagnosis was later confirmed with laboratory investigations. As he was desaturating, we initiated ventilator support. He developed ARDS and his condition continued to worsen. Therefore, we decided to start ECMO (Extracorporeal membrane oxygenation) to support his oxygen needs. But this treament would cost around 7 lakhs.
Considering the expense of his treatment and his financial status, the caring team informed the management regarding the need for financial aid. Our management decided to continue Akhil’s treatment without waiting for the money. In the meantime, the communications team got consent from Akhil’s father and published his story on the internet seeking financial aid. With God’s grace, many people empathized with the story of Akhil and helped him financially.

Meanwhile, as we continued treating Akhil responded. Our Critical Care and Internal Medicine teams were thrilled seeing his amazing response to treatment. Our friends and supporters around the world continued to pray. He was shifted from ICU to the ward on November 7, 2020.  By 10th November, Akhil was back on his feet in good health and was declared safe to be sent home. By the Grace of God and the committed effort of our healthcare team and most importantly your love, concern and financial support, Akhil is back at his home in good health.